Want to hear from us?

We'll send 2-3 emails a month to include sale announcements, new products newsletters, and any discounts!

Simple and bold SHERIFF patch made of PVC offering great durability to handle hard use requirements. Large 8.5" x 3" size is perfect for being placed on tactical vests. Hook material sewn on the back.

Shipping was fast and while the patches are fantastic quality, I only received 1 of 2 patches. I reached out several times via email and phone with no success until 10 days later. Once I spoke to someone, my 2nd patch was mailed to me quickly. Upon receiving the 2nd patch, I immediately noticed the patch was not the same color as the one I first received. The first one was an obvious OD green and the second was obviously brown. This was interesting as they did not offer a brown patch. The colors they offered were OD GREEN and BLACK AND WHITE. See pictures. 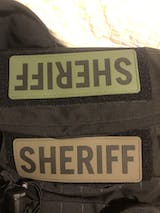 The best gear, extra fast, at the best prices.

We're veteran founded & led, so we know intimately the need for gear you can trust at prices you can afford. We offer the most innovative new tactical gear, bomb proof military equipment, and affordable used surplus to cover all your mission requirements.

All in-stock items are on hand and ready to ship out. Orders placed by 1 PM eastern time ship out same day in most cases!

Have a problem? Just call us! Our staff can be reached anytime during normal business hours at 757-95-888.

Don't run the risk of buying fakes. We're authorized dealers of your favorite brands, so items are always authentic.